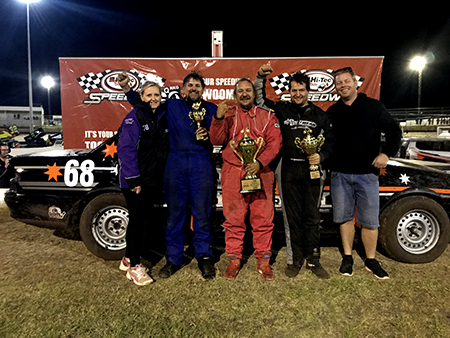 Despite the super-fast racetrack, passing was still at a premium with amazing battles throughout the heats.

Twelve Junior Sedans took the green flag in heat one with ten starting the 15 lap final, with the field spreading before Hayden Brims spun with seven laps remaining, closing the gap between Ardie Jonic and Erik Wallace who’d battled throughout the heats to come down to a final showdown, with the Jonic bettering Wallace for the win in lap record time with Dylan Keen a very close third.

The Legend Cars reduced their final to eight laps as a three-way shootout between Matt Gordon, Ian Jones and Leigh Walker with Gordon unstoppable in the #Q92.

Brumpton Motorsport threw some support behind the return of the National 4’s for the first time since 2016, with Tim Weir’s Sierra an absolute treat to watch on the Hi-Tec Hi-Banks, bagging a phenomenal 15.78 lap record to claim the win while lapping the field, with second and third spoils going to Brock Hancock in the #SC53 Lancer and Brayden Mooney in the #SC31 Pulsar.

Shane Munro was in scintillating form claiming the new record in the Microsprints lapping all but the rest of the podium of John Lawson and Julian Munro.

The Edge Automotive and Performance Mountaineers Street Stock Cup was originally scheduled for last New Year’s Eve but was rained out and rescheduled for the season closing Sportsman Event.
Nine cars started the 15 lap final, with reigning Queensland Street Stock Champion Robert Trapp looping the Commodore five laps in and seemingly out of contention, until multiple spins in the top three brought on the caution lights on four occasions.
With four laps to the finish, Kenny Simpson and Dylan Jarman engaged in an unbelievable battle for the $500 first prize, with Simpson claiming an impressive win over Kingaroy’s Jarman and Toowoomba’s Robert Trapp in a Lazurus effort to claim third.

In the Stockcars, Jeremy Hemi’s domination in the heats bagged a new record but was undermined in the final with a tragic DNF, while Graham “Bear” Rangihuna found some extra power to take the final win, over Mark Strachan and Scott Pitura.

The Modified Sedan final hosted fourteen starters that had all the feel of a title race, with a red light stoppage only two laps in as a result of a tail end collision as Kent Shelford turned the #21 around in turn 3, before Peter Grey, Darren Ciesiolka, Kerry Lack, Steve Love and Jamie Love arrived on the scene with Lack gripping up into a gentle roll-over in the #95 and out of the race.

Darren Ciesiolka spun at half race-distance bringing on the second caution bunching up the field, however Rodney Pammenter continued his matchless form from throughout the night, claiming a new record and the feature win, with Tim Smith an impressive runner up after a monster battle with Shane MacDonald that was decided just metres from the finish.